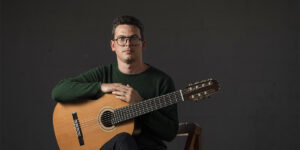 Born in Fortaleza in the North-East of Brazil, immersed in vibrant Brazilian musical culture, Luiz Morais built his musical foundations playing rhythms such as Samba, Choro and Bossa Nova as well as the iconic North Eastern rhythm of Forró.

Graduated in Brazilian Popular Music from the University of Rio de Janeiro (UNIRIO) in 2010, and completing his MA at Berklee College of Music in 2015, Luiz can count among his teachers great masters of Brazilian guitar such as Mauricio Carrilho and Luis Otávio Braga as well as master Jazz saxophonist Perico Sambeat. Ever deepening his study of arrangement and composition, he is currently a student of the revered Brazilian arranger Vittor Santos.

Luiz has a wide scope of musical influences, ranging from the musical greats of the popular Brazilian tradition such as Tom Jobim, Pixinguinha, Moacir Santos, Edu Lobo, Hermeto Pascoal and Guinga as well as Jazz masters Miles Davis and Wes Montgomery.

Based in London since 2010, Luiz Morais launched his first album ‘Nascente’ to critical acclaim in the UK, Brazil and Spain in 2013. His second album ‘In the Weave’, was released in October 2021. With all original compositions and arrangements, this work draws from the Brazilian tradition forged by the likes of Tom Jobim, Baden Powell and Moacir Santos and weaves new threads and connections to contemporary Jazz. From the unique rhythmic force of the Brazilian guitar tradition, Morais builds his intricate and vibrant weave of sounds. Masterfully produced by legendary Brazilian trombonist and arranger Vittor Santos (The Ipanemas), it features top instrumentalists including Marcio Bahia (Hermeto Pascoal) on drums, Marcelo Martins (Djavan) on flutes/alto sax and Alberto Palau (Perico Sambeat, Charles McPherson) on piano.

Gathering the best Brazilian Jazz instrumentalists working in the London scene, Morais leads the Luiz Morais Group, performing in top London venues such as Pizza Express Live, 606 Club, Royal Albert Hall and Crazy Coqs as well as playing in various projects all over the UK and beyond, with Gareth Lochrane, Georgia Mancio and the Adriano Adewale Group amongst others. He is also a founding member of top UK Choro band Alvorada, who in 2019 won ‘Best Band’ at the Focus Brazil awards and ‘Best Brazilian Act’ in the LUKAS awards. In 2020 they were nominees for Songlines Music Award’s ‘Band of the Year’.